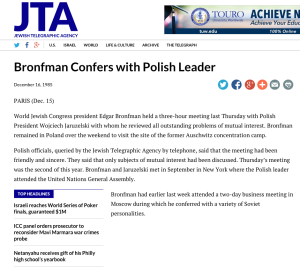 World Jewish Congress president Edgar Bronfman held a three-hour meeting last Thursday with Polish President Wojciech Jaruzelski with whom he reviewed all outstanding problems of mutual interest. Bronfman remained in Poland over the weekend to visit the site of the former Auschwitz concentration camp.

Polish officials, queried by the Jewish Telegraphic Agency by telephone, said that the meeting had been friendly and sincere. They said that only subjects of mutual interest had been discussed. Thursday’s meeting was the second of this year. Bronfman and Jaruzelski met in September in New York where the Polish leader attended the United Nations General Assembly.

Bronfman had earlier last week attended a two-day business meeting in Moscow during which he conferred with a variety of Soviet personalities.